IT’S CALLED the BMW X2 but you may also think of it as the X0.9, since it is effectively a low-slung version of the company’s X1 subcompact crossover (2.8 inches lower and 3.2 inches shorter overall). Aside from its urbane proportions and funky styling, the X2 is kinda-sorta the same: a transverse front-mounted 2.0-liter turbo four-cylinder engine (228 hp) and eight-speed automatic under the hood; front-biased all-wheel drive; five seats and five doors.

Under the tardigrade-looking bodywork X2 is also the mechanical twin of the Mini Cooper Countryman, built in the Netherlands from the same box of parts, mostly, in the same approximate dimensions and sold for about the same price (Mini is a wholly owned subsidiary of BMW). New car smell? Same.

If you are out there cross-shopping our test car, the X2 xDrive28i ($38,400 MSRP) and comparably equipped Countryman John Cooper Work ALL4 ($37,900), first, congrats, good for you. I haven’t driven the latest Mini but its Bavarian kin ($50,920, as tested) is a superb little auto: rock-solid, fast and feisty, full of handling confidence, very refined, with the best cabin innards and UX in its class. Yes, it looks like a half-baked lump of cookie dough. You don’t like cookies?

Second, given the cars’ overlapping cost-attribute matrices, know that the choice is almost entirely inflected by marketing, your perceptions of these two charismatic brands. So who do you want to drink a beer with? The pugnacious Brit with the pint-a-day body; or the boot-heeled Bavarian, fahrting in its lederhosen of chip-resistant body cladding? Either way, BMW Group’s accountants will respect your decision.

‘What keeps the X2 from being a mere commodity is its fabulous BMW engine: sweet-revving, well-isolated, big fat torque.’

Putting the X2 on hold a moment, perhaps something rings a bell from economics class? Commoditization is the process by which uniquely desirable products are copied and competed against until they become undifferentiated and interchangeable with others. This is a known hazard, yet the relentless demands for profitability have encouraged car makers to, in effect, commoditize themselves: to offer broadly the same vehicle—the same automotive experience, the same metrics, the same price per pound—under plural brands.

Here’s a short, patchy list of premium/entry-luxury small crossovers and their potentially cannibalizing cousins: Jaguar E-Pace/Land Rover Discovery Sport/Range Rover Evoque (on Jaguar-Land Rover’s D8 architecture); Audi Q3/VW Tiguan (MQB). The Mercedes-Benz GLA 250 and Infiniti QX30 are both built on Daimler’s Modular Front Architecture but only one looks like it’s running past with its hair on fire.

From where I sit, commoditization is the least acknowledged force in car design, a supergravity pulling everything toward a boring singularity. Sometimes it feels like the whole smash is about to spontaneously burst into building washing machines.

I suppose my feeling about the X2 is that it’s commoditization done right. Sure, it has a high degree of similarity with its competitors on the inside. Still, you can’t say the outside—like an untrussed sack of chicken livers—doesn’t push back on sameness.

The X2’s wow factor comes from the lowered roof, soft shoulders and narrowed side window graphic. I like the roundel on the C pillar too. Another detail: the twin-kidney grille design has been squared off—hexagonized, I guess, and inverted—suggesting a branching species of the same brand.

Incidentally, our test car showed up wearing a Halston gold lamé dress (Galvanic Gold Metallic). Not going to lose that in the parking lot.

Inside, the standout feature is the old-school lever gear shifter. Nearer your elbow is the rotary touchpad known as iDrive controller. iDrive is among the friendliest and most intuitive infotainment interfaces the market, after Tesla and Audi, I judge. Shout out also to our car’s interior trim of etched metallic panels with 3-D effect. Very nice.

But let’s get real. What keeps the X2 from being mere commodity isn’t its high-end cabin trim, power tailgates nor magic-mushroom styling. It’s the fabulous, inimitable BMW engine: sweet-revving, well-isolated, with big fat torque (258 lb-ft) coming in at a low 1,450 rpm, always in the right gear.

Even in the premium-luxury segment, a lot of small-displacement turbo engines tend to be: A) noisy; B) laggy, especially when they are operating in a fuel-saving Eco mode. But BMW’s cybernetic cylinder heads (fully variable valve lift, variable timing on both cams, quickspooling turbo) exercise utter mastery over the combustion event. What a sewing machine. Even in default Comfort mode at low speeds (conditions in which many competitors go limp), X2 answers with ready, refined thrust; in Sport mode decisively more so. The X2’s 0-60 mph acceleration figure (6.3 seconds) doesn’t do justice to the engine’s velvet-glove punch in the second and third gears. 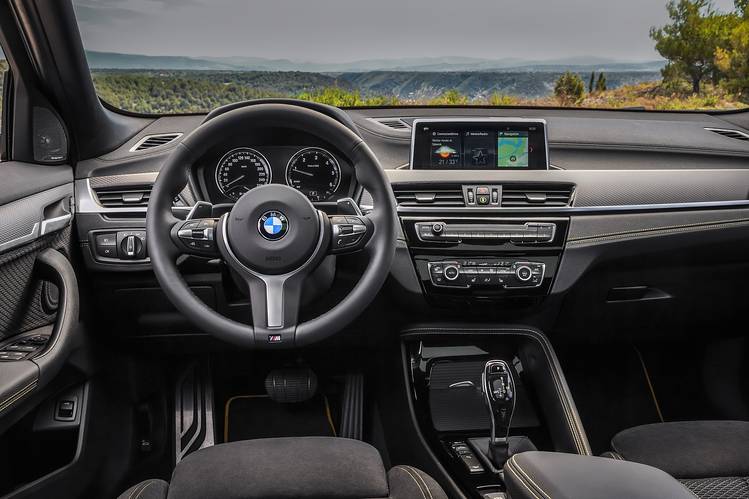